“Searching” for the end game…

Stats have been released that show Android powered devices have outsold those powered by Apple OS in the first half of 2010. Of course, with Apple being the only hardware manufacturer running the iPhone OS, these figures are not really telling a like for like story and only hold limited value in terms of comparing the two products. The interesting part however is in the respective end games of Apple and Google.

I think with Apple, this is fairly simple. They make the devices, they make the OS, they even make some of the components within the device so their end game must be, to stay at the top of the pile in terms of design, desirability and of course, usability. With Google however we see a very different story, the hardware they provide is telling a very different story and the focus on the Nexus One phone itself has long since diminished.

Things feel very reminiscent of the PC vs Mac war of the 80’s. Back then, Bill Gates had predicted that the value of these new personal computers would lie within the OS and applications, not necessarily the Hardware, Steve Jobs however had different ideas and when the Windows OS became a tool to allow other companies to gain ground in a growing market, Apple lost share. Now I am not predicting or comparing this as the same kind of market but one has to ask where the mobile market will be in say 3 years time?

I think it is fairly evident that Google made a very smart move acquiring Android and allowing others to build on it as the end game for them must surely be mobile search volumes but how will things pan out in the long run? Will Apple have to re-think their strategy or is their business model so far away from the likes of Google that they will continue to drive forward and lead this market with Brand and usability at its heart? 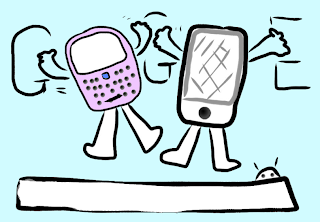