So it must now be over a week since Twitter introduced lists and as with any new feature to this unstoppable platform, the users have gone Tweet and blog crazy about it. Firstly, there was the race to blog about it, how it works, what it means, what it will do for you etc. Next comes the inevitable flaw finding, people look at the different scenarios of not wanting to be in a list or what happens if you get listed as a doofus, can you remove yourself by blocking this person? It seems now that the conversation has moved on to number of lists you are in, are you being described as x or y or even a "thought leader". 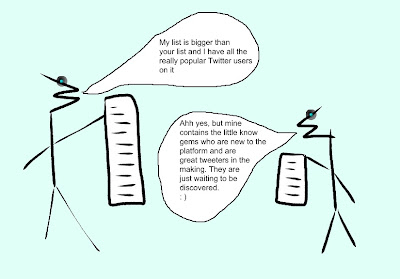 So my take is that you really shouldn't care. Yes it is nice to be listed and yes it is nice to be considered as an expert at something or even a "thought leader" but once again, it seems that this feature is being dubbed by some of the more followed / following users as some form of popularity contest. Yes twitter is about connections and popularity and sharing of thoughts but it is certainly not a competition. One of the greatest things I get out of Twitter is discovery and if there is one thing lists should be used for then it is to allow others to discover the little known gems that you know about and increase the value for others of this great platform.