Are you a Faux Weblebrity?

A couple of times yesterday I have found myself having a Twitter Chitter* about blogging, Twitter faux celebrity users and generally how people engage with their audience. The first conversation occurred with @Mazi where he had posted a link to an article about people becoming celebrities by using Twitter. I liked the article and tweeted back to him that I thought some people actually thought they were a celebrity due to their Twitter following and acted accordingly.

So thinking further about this conversation I started to think of all of the blogs I have read over the years and up to present day and notice that the same has now become true for the blogosphere. Actually, with the Web 2.0 era we now seem to have the weblebrity and also the wannabe weblebrities.


So how does this occur? Firstly, I am delighted to say that some very smart people who may have been working in whatever job are now recognised as an expert in their area (even if this was a hobby it is possible to become well known as well knowing in a certain niche area). People are able to share their thoughts, theories and sometimes work with other like minded people which in turn may open up further channels of information and interest for people who beforehand would never have found it. The web is now a place not only to find what you are interested in but also to find other things you may be interested in that you didn’t even know about, all made possible by things such as blogs and apps such as Twitter.


So what about the weblebrity? As in the initial article tweeted by @Mazi, people have become famous to their following by doing something and anything that people are in to. Whether it be writing about something, tweeting random but likable one liners or actually drawing or photographing something in your interest area, if people like it, you will get a following and become that weblebrity (however minor or major). So what about the faux weblebrity or the wannabe. Well there are a lot of these people. They get wrapped up in the fact that they believe that people want to hear what they have got to say then gradually, slowly but surely turn into everything that is bad about actual celebrities.
So what are the traits? Well there are many. It is often possible to pick these up by just reading blogs or tweets and their tone but some of the more obvious ones are as follows:-


· They will only converse with other weblebrities, if you don’t have the following; I won’t @reply to your @reply.
· Start speaking about themselves in the third person
· Start saying things that prior to your deluded weblebrity status you would never have dreamed of and then actually believe that the listening public really want to hear this. E.g. “O the muesli or the corn flakes, o the decisions of my life”
· Start trying to prove how weblebrity you are and show your web 2.0 status. “Hey man check this site out, I was here before this [insert celeb name here], that must prove my credentials.


So why have I written all of this. Well it is to try to carve a hole in the idea and the world of at least the faux weblebrity. If someone is playing that game, tell them. Explain that they are not a celebrity but actually a [insert job title here]. Tell them to get off their high horse and stop talking about the good old days of the Internet and embrace the current world. Embrace the new people to the medium and give honest feedback based on what you are hearing rather than what convoluted opinions you have formulated from your many many years of Internet experience, or even worse check what someone else thinks (with greater weblebrity status) and actually regurgitate what they have said without actually giving credit to them.


So finally, encourage the right people to get involved. A good friend of mine @Davidintelbyrne asked yesterday if he should blog. David works for Intel and is currently working in the arena of Solid State Drives. This area is very interesting and by working for Intel, he really is at the front of this technology curve, so in answer to your question David, “do it!”, there will be loads of people interested in what you have to say. 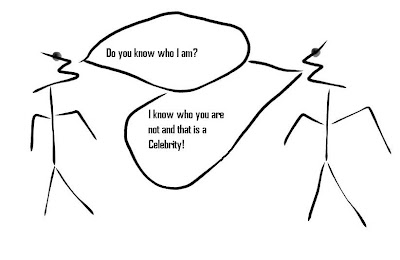